Opinion: Who is Robert? And why do his rules matter?

First, let’s start with the parliamentary body. It is any group of people that makes decisions, typically by giving one vote per person. Some examples are a board of directors, a school board, a city council, an HOA, a county board, and even a church board.

Second, who is Robert? His full name was Henry Martyn Robert, and he was an officer in the United States Army at the turn of the twentieth century. Long story short, Robert was somewhat disgruntled at the lack of consistency of how small parliamentary bodies ran their meetings. So, he set about establishing some guidelines. 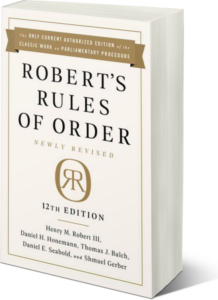 Robert modeled his guidelines after the procedures followed by the U.S. Congress, the supreme legislative body in the nation. While he first published his guidelines in 1876, they have been revised on several occasions. The most recent update—the twelfth edition—was actually published last month, September 2020. Most parliamentary bodies specifically adopt “Robert’s Rules of Order” in their codes, or by-laws. This allows their procedures to automatically update every time a new edition is published.

girl lied to me about her dating someone Be the first to know.

You are subscribed to the A Great Meeting news list. You may unsubscribe at any time.

We hate spam as much as you do. We will never use your email for anything except notifying you about A Great Meeting, Inc. special information. See our Anti-spam policy and our Privacy policy for more details.